There is a new retirement plan in India designed through a mutual fund that is launched by Tata mutual funds called the ‘Tata retirement saving plan’. The company is trying to market it using a word 30-30 challenge which says that there are 30 yrs of our work life and then 30 yrs of retirement life and you need to plan for the next 30 yrs in the first 30 yrs. The plan is currently at NFO stage and will be open till 21st Oct 2011.

There have been some readers who enquired about this plan in our forum. Let me review the plan in this crisp article. Basically this plan has 3 different kinds of funds inbuilt which are called as 1) Progressive Plan, 2) Moderate Plan and 3) Conservative plan which all have different risk profiles (risky, balanced and safe). As per the asset allocation rules the investor’s money will be moved from one fund to another fund as per his age. So all investors who are below 45 yrs age will be in progressive fund (highest risk), then once they reach 45 yrs, their money will be moved to moderate plan and once they reach 60 yrs, they will be moved to the safest option called conservative plan. Once investor reaches 60 yrs of age, he will be getting pension from this plan in form of SWP (systematic withdrawal plan) which is nothing but a known way of withdrawing out of mutual funds systematically. There will be option of getting 1% of corpus monthly or 3% of corpus quarterly. Let’s see this auto switch and auto withdrawal options in a little detail.

There is an auto-switch facility in this plan, which means at each milestone you will be automatically be switched to the next fund without any exit load. So when a person reaches age of 45, he will be switched from Progressive plan to Moderate plan automatically and when he reaches age 60, he will be auto-switched from moderate plan to conservative plan. Note that one has to choose for auto-switch option at the time of buying the plan.

Switch between the funds manually

One can also switch between the funds manually whenever they want, but in that case if the switch is before 5 yrs from the date of enrolment, there will be exit loads applicable, but if 5 yrs has passed, then 3 exit load free switches will be allowed.

A feature called Auto systematic withdrawal plan is there in this plan, which will start redeeming your funds and start giving you your money in the form of pension. There are two options in this. In the first option you can get 1% of your total corpus each month and in second option you can get 3% of your corpus each quarter, as decided by you. You will also have an option of not taking any pension amount through SWP route if you wish. So one can just leave his money in the fund and let it grow. 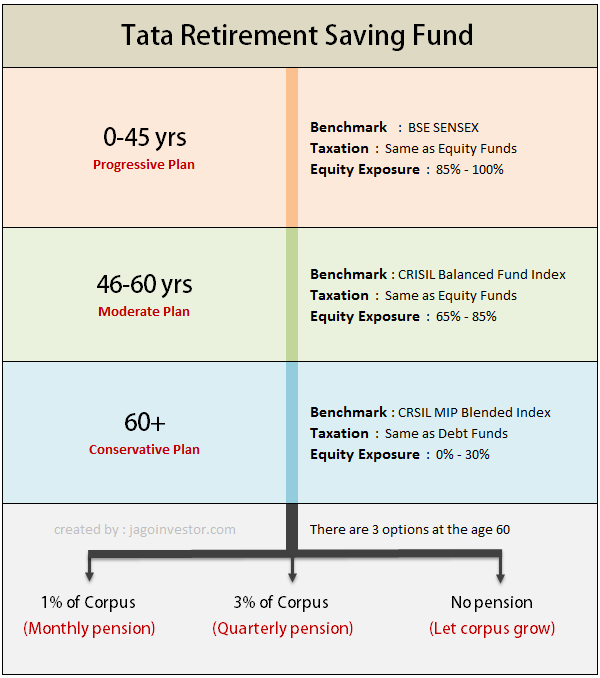 Not so good points

For Jagoinvestor readers who are quite pro in themselves, the personal suggestion would be to make their own diversified portfolio and have a full control on what they can do with it. This fund look good from features point of view, but it’s mainly for non-DIY kind of investors.

47 replies on this article “Review of Tata Retirement Saving Funds”

This site uses Akismet to reduce spam. Learn how your comment data is processed.