Today we will see some characteristics of SIP (Systematic investment plans) . this is first part of this article, we will have part 2 of this as well where we will discuss other important things about SIP.

We are assuming that investments were started from year 2007, It has both a part of Bull markets and Bear market, So i chose that time frame.

Let us first see an example where investment was made in NIFTY ETF’s . There are two friends Ajay and Robert. Both of them want to invest Rs.50,000 in markets with 2 yrs of time frame in mind. Both of them do not have that much cash in the start.

Robert believes that Markets are in Bull run and hence it has good chances of Capital appreciation. He does not want to miss this chance and decides to borrow money on loan from friends and family or personal loan and invest it.

What are his Characteristics at this point?

On the other hand Ajay is an informed investor and does understand cycles of Market, He knows that markets run from up to down and the bull market which started in 2003-04 has already run a long way and can turn any time now. He understands that its a better idea at this point to not get into debt to invest in stock markets . He controls his Greed and will invest only what he has. Also he decided to invest 50,000 in 2 yrs. but a small amount month by money systematically.

Now lets see the capital appreciation which happened for both of them.

Robert invest full 50k in the start around Jan 2007 with 2 yrs of time frame. Ajay also decides to invest the same amount but he breaks it in smaller chunks and wants to do it using SIP on his own. 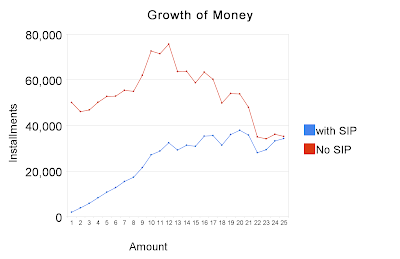 Lets look at what happened ?

Markets continue to rise and Robert sees his investments grow from 50k to 75k within a year. Ajay also sees his money grow to 35k, on an investment of 25k. If you see at this point, Robert has made very great returns on his investment compared to Ajay.

But after that see what happened. Markets started going down and investment of Robert kept coming down with markets and at the end it was at 35k. With Ajay it was a different case. His investments went up and down both sides and finally ended at same point at 35k.

You can see the behavior of Robert’s investments. It was too volatile. You can see it going up and down and here and there. I am not saying that it didn’t move and made profits, It made good profits at one point of time, but Robert must be smart enough and courageous to take his profits even if markets are going up and there are chances of making more.

People who want “more” and “more”, eventually not even get “what they had”. Have a target and BANG !! Once it moves at that point, be unemotional and take the profits. Markets is a place where money is flesh and everyone is Vultures. If you leave it open for a long time, It will be taken by some one of other.

The other thing is Psychological issue.

Because investment moved so high, and then so low, Robert must be feeling bad and too conscious. He must be regretting a lot on not taking the profits. This has bad effects on investment decisions.

His 50k goes up to 75k (high) and then it moves down to 38k. Draw down of 41k which is 49.3%, this can have devastating affect mentally, as one sees his investment grow to 75k and then drop to 38k and finally end at same point 38k after some volatile movement up and down.

You can see the consistency of Ajay portfolio. It moved up and up all year whee markets where rising. and once markets started going down and was volatile, his portfolio was also volatile , but not very high, Its volatility was very low and finally it was almost at the same point as in the start of the year.

Infact you can see that his portfolio was rising still when Roberts was declining.

This highest Drawdown seen by Ajay portfolio was from high of 39k (20th payment) to low of 35k, which is just 10.25% drawdown. You can get a feel, How difficult or easy it must be for Ajay to see this.

The point here is not Who made more money or Lost more. Infact you can see that they both were in loss of 12k on an investment of Rs.50k, But the journey was not same for both of them.

While Robert worked too hard and saw wild swings. Ajay made systematic investment and continuously saw his money go up only with minor drawdowns, which was easy to handle psychologically. This is true for any investments weather it is Shares, Mutual funds or ULIPS investments.

Now’s let see and example for the same period, weather these two same investors have made investment in UNITECH.

I have taken this example because it shows what I want to show, the power of systematic investment. Here both of them are investing Rs.1,00,000 (1 lac) in Shares of Unitech. Roberts invests 1 lac in the start of Jan 2007, where as Ajay makes weekly investment of a fixed amount in such a way that it adds up to Rs.1,00,000 at the end of 2 yrs.

You can see the behaviour of portfolio for both of them. 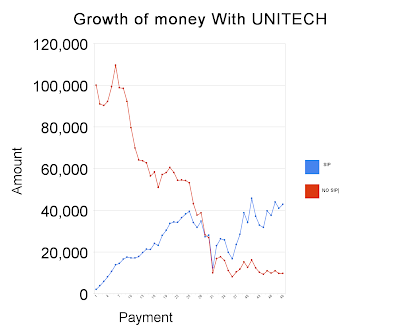 Now the main question? What is good One time investment or SIP? The answer is both are good inp different conditions, and it depends on your Risk appetite too.

When you don’t have clear indication of trend and are not sure where markets can go, the best idea is to invest through SIP . That will save you from volatile markets and small down moves too.

SIP will definitely miss out on returns in BULL markets. But it will work best in Volatile markets and falling markets. SIP is not a way to avoid losses, its a way of investing, where you feel more disciplined and average your cost of investment of long term.

Watch this video to know the magic of SIP:

The examples I have taken were biased because of the idea I wanted to communicate.

Anyone who did one time investment in 2004 would have made more money than someone with SIP, till 2007 at least because of the rising markets.

You must have seen in first example that Ajay’s portfolio was at 35k in the start of 35k, and even at the end of 2009, it was at same point even though markets fell from 20,000 levels to 10k levels and was too volatile, there comes the power if SIP (the money you pump in fights the falls in markets at least).

Part 2 : This is first part of this article, we will have part 2 of this as well where we will discuss other issues and things regarding the second example we took (UNITECH)

If you are on twitter, try to post this article there, so that your friends can read it. I also have a small complain from my readers. please recommend this blog to your friends and any one you know and needs it. I feel this blog needs more readership and deserves too. You can help me promote this blog to others, please pass it on to others. Thanks

Also, why don’t you guys and gals leave me messages and comments, please put your comments with your views on article and your own ideas, I should also get chance to learn from you all, don’t I?

119 replies on this article “Magic of SIP in Mutual funds , Part 1”