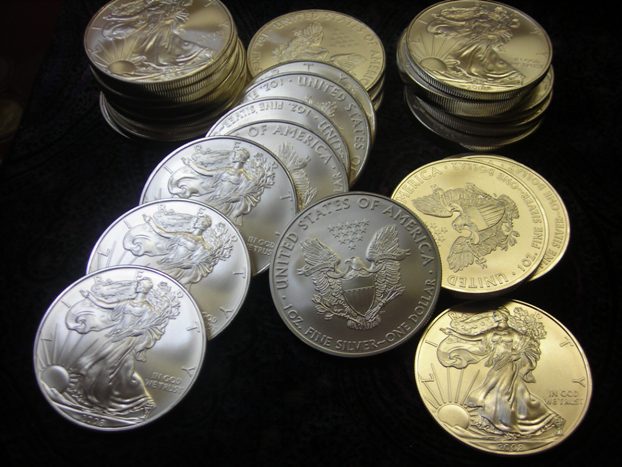 Now a days there is a big debate going on different TV channels as well as newspapers that what should a common man buy? Gold or Silver?

In our country, Gold is something which every family buys because of the attraction we have for this metal. On any occasion, gold is the obvious choice. But Silver is not seen the way gold is looked upon. It’s generally limited to not so well off section of the society. This is one of the reasons why middle class or even richer one’s never considered looking at what’s happening in silver and if it can have some potential in future as an investment option. Gold, Gold and Gold was the only option when it came to buying some precious metal.

A lot of people are surprised to hear and see how gold has given fabulous returns year on year in the last decade, but now you would be more surprised to know that for most of the years silver has outperformed gold with good margins in terms of returns. For example, everybody knows that Gold gave 25% return in 2010, but not many know that Silver in the same year gave 80-85% return.

Silver has given 24% absolute return in just one month of April 2011. I don’t think it’s anything other than speculation because that rise was short-lived and in just 1 week (May-‘11 first week), all the gains made in Apr disappeared and prices fell by 25%.

Below is the chart which shows you the monthly price movement in silver for last 30 months. You can see how silver prices exploded in last 4-5 months (2011) 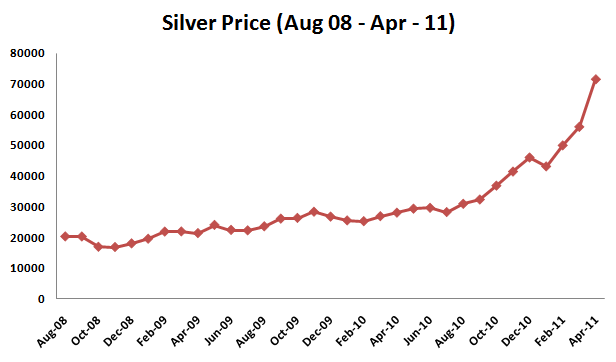 One of the biggest and obvious reasons behind the price movement for anything is its demand and supply in the market. It directly impacts the movement in price. It is estimated that in 1950, the reserves of gold was 1 billion ounces, but by 2010 it increased by 700% to 7 bullion ounces (see the video below)

However on the other hand it is totally different with Silver, in 1950s there were 10 billion ounces of silver, but by 2010, it dropped by huge 95% and its current reserves are only 500 million ounces worldwide. A very obvious reason for this is that gold is mainly stored in form of bars, jewellery etc and its recycled again if required. However silver is also used widely in Industry in very smaller and thin parts which get lost and never reused. In fact, it is not possible to use it again because of its used in lesser quantity and in small parts. 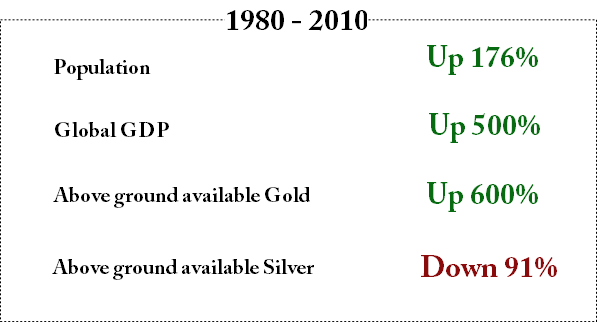 2. Practical use in life

Gold and Silver are very different when it comes to its usage in real life. While both of them are precious metal and often used as jewellery, Gold has a very different image and can be considered as the undisputed king in this area. From millenniums Gold stands the most favourite metal for jewellery, in fact there is some kind of unseen connection which humans have with gold, which cannot be explained. May be it’s the way it has always been and it can’t be changed. But if you see gold as a useful metal, it does not have much to show off. It’s literally not used anywhere other than at a few places.

Silver on the other hand is also used in various industries and holds a very important position. In fact you can see it as “gold” for industrial use. Let me give you more info on this. Silver is used in Bandages, batteries, soldering process, cell phones, computers, satellites, high-tech weapons, laser and digital technology, electronics circuit board, solar cells, water purification, RFID chips and the list goes on.

Silver has more industrial applications than any other metal. A recent report by Hinde Capital says: “It’s the best conductor of both heat and electricity, the most reflective, and second-most ductile and malleable element, after gold.” The white metal is also being put to several new uses like-water purification, air-handling systems and a natural biocide.”

In last couple of decades, Silver is so extensively used in Industry that it’s reserves has drastically gone down. Just to give you an example, in the decade of 1990 – 2000, around 2 billion ounces of Silver was consumed. That’s a lot of silver!

Precious metals are always considered as the alternate currency and wealth in pure form in any emergency situation. Gold is a universal currency and not dependent on country or any community.

In times of war, people fear that their assets may be seized and that the currency may become worthless. They see gold as a solid asset which will always buy them food or transportation. Thus in times of great uncertainty, particularly when war is feared, the demand for gold rises. That’s exactly what happened in Zimbabwe lately, where currency is worthless now and people are using gold as alternate currency to buy bread

You might have heard lately about rise in Silver prices and definitely you might have felt that you “missed the bus”. Let me talk a bit on that. You have already read about the reasons of price rise in silver above. One of the biggest reasons is fundamentals of silver, it is a valuable asset and over a long-term, it’s going to be much valuable because of its use in industry, every industry requires silver!

But other than fundamentals, there are elements of speculation also involved, otherwise I don’t see any reason for 150% rise in its prices in just 1 yr and then a 25% fall in just 1 week. It’s going to be volatile.

To know why the price of silver fell recently , read this article . Please share your comments on Gold and Silver as an investment .