Do you know who to calculate principle and interest part in your home loan’s EMI break up? Do you know how each EMI is distributed to principal and interest repayments? It is extremely important to have this knowledge because a lot of real life decisions like prepaying the loan, opting for the loan tenure and many more such aspects depend on how your EMI is structured. 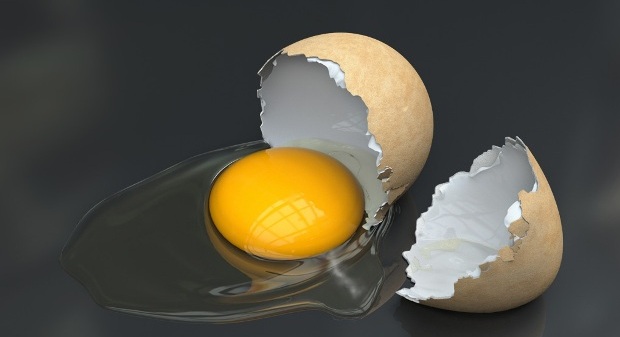 What happens in a general scenario? Loan is opted for from a Bank and you start paying your EMIs each month as contracted (see this excellent article on how EMI formula is derived ). When you pay your EMIs, some part of it goes towards interest and remaining towards principal repayment. So each month you are reducing your loan by some extent and now as your loan have reduced, you will be paying less interest on your next instalment. In the same way, with each passing month, your loan gets paid by some amount and balancing amount keeps on reducing resulting in paying lesser interest month on month and year on year and the day comes when you fully close your loan. Note that your EMI is generally fixed and internally it’s worked out into ‘interest’ and ‘principal’ repayments.

However, even today, a lot of people have no understanding of the idea that in the early years of repaying the loan, interest component is very high as compared to principal repayment. The longer the tenure of the loan, the interest component will be higher than principal payments and also the rate at which the interest part will come down will also be lower, making sure that in the initial years most of the EMIs goes towards ‘Interest’ and not ‘principal’.

The chart below shows the breakup of interest and principal payment for each year for a 30 lacs loan for 20 yrs tenure assuming interest @10%. So each bar is broken into two parts, where green bar represents Interest part and orange bar represents principal part. It is clearly visible that how interest forms a major part of overall EMI in initial years and only in the later years principal part becomes high. 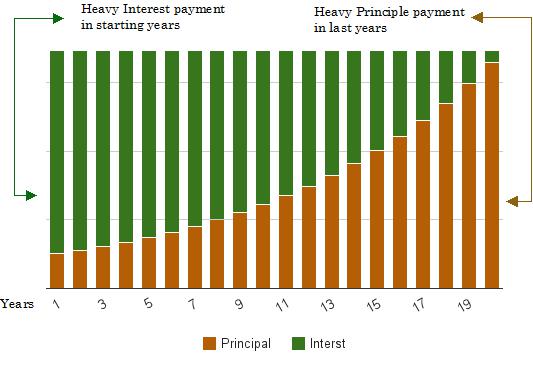 Here is the actual breakup of the EMI in numbers 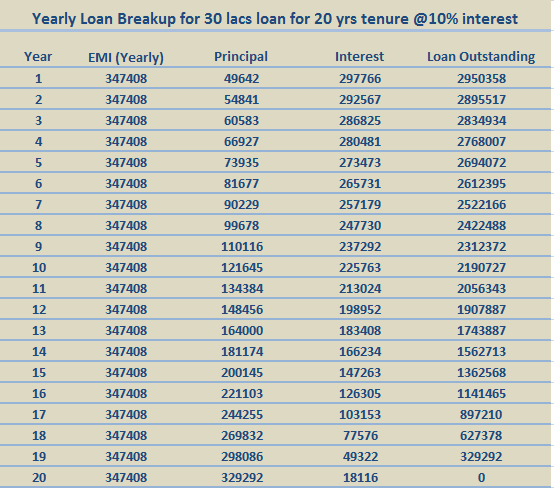 A lot of investors opt for 15-20 yrs loan thinking that they will pre-pay the loan in next 4-6 yrs itself because of their salaries will rise or for some other reasons. In these cases, for the initial years they keep paying loan interest only and not a lot towards principal. When they prepay the loan, they end up paying a little lesser amount then original loan amount. Example, if you take a loan of 30 lacs for 20 yrs tenure at 10% p.a. and prepay the loan in 5 yrs itself, you will still end up paying 27 lacs as loan outstanding, even though you have already paid 17 lacs in EMI in last 5 yrs, Pre-payment penalty would be extra! But the positive side is that there might be a good appreciation in the house value itself.

So if you are taking loan for longer duration thinking that you would pre-pay the loan very soon, you need to rethink! This makes sense, once the worth of your house has gone up and there is a decent profit. A better option which I can think of is to pre-pay in small chunks each year along with your EMI’s from the start of the loan payment. It would make sure that you principal goes down in big chunks each month.

If you take short term loans, because of the shorter duration, the bigger chunk of the EMI is actually principal part, hence you can look forward to pre-pay the loan incase you wish to.

I have created and found out some loan amortization calculators which you can use for calculating your EMI’s and its breakup into principal and interest for each month.


By now you must have got a clear understanding on loan amotization and how home loan EMI is broken into principle and interest component. Note that the asssumption for this article was that the loan is on “Monthly Reducing Balance”