There are so many LIC policies with different names ? For example – LIC Jeevan Saral , Jeevan Anand , Jeevan Tarang and many more LIC policies. So almost every person in India holds some  LIC policies , but majority of them do not know how these LIC policies works ? 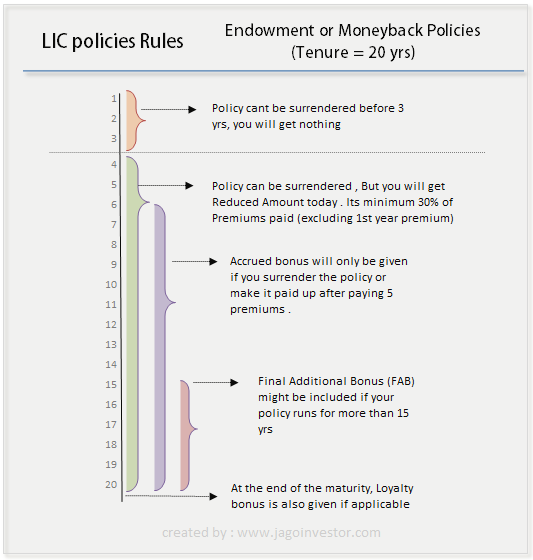 Most of the investors just take things for granted and keep dragging the policies assuming it would be the best thing in their financial life. In this article I will show you how Life Insurance Corporation (LIC) policies work and talk about few aspects like LIC bonus, LIC premiums and different other aspects which will help you in understanding how these policies work.

A lot of LIC policies pay you on a periodic basis like at the end of 4th, 8th and 12th year, and then finally at the end of the maturity period. These policies are Money back policies, the example can be LIC Jeevan Surabhi or LIC Komal Jeevan . A lot people get attracted to these moneyback plans because they get money “many” times in between and it looks attractive to them, but the premiums are generally higher for these policies.

Then there are LIC policies which do not pay you back periodically but only pays you at the end of the maturity period. They are generally termed as normal Endowment plans. Some examples are  Jeevan Anand  and  Jeevan Tarang

The biggest confusion I see is generally in Bonus by LIC. One thing which investors in these policies don’t know and don’t care for to find out is that there are different kinds of bonuses in LIC policies and they are calculated differently. Let’s see them one by one.

Generally when we say “Bonus”, it is this “Simple Reversionary Bonus”, which is declared per thousand of the Sum Assured on annual basis at the end of each financial year. This bonus is declared today, but is paid at the end of maturity period only or on death, whichever is earlier. So for example if you hold a policy of Rs 10,00,000 Sum assured and the bonus for this year is Rs 60 per thousand sum assured, then your bonus amount is Rs 60,000 for this year, but you will only get it at maturity (after many many years) or on death, but by then it’s worth would be much lesser than today (this 60,000 today and 60,000 after 20 yrs).

A very important point to note here is that, if you surrender the policy, you don’t get the actual accrued bonus because it’s the future value, you will only get its reduced amount in today’s term and its very less. Also note that you are eligible to get reduced Accrued Bonus only if your policy has completed 5 premium paying terms. (This thread on our forum discusses Jeevan Anand in good detail)

There is another kind of bonus in LIC which is generally called as “FAB” or Final Additional Bonus and it’s paid to those policies which are of a longer duration and has run for more than 15 yrs (The premiums are paid for all 15 yrs). This is generally a token of appreciation for being with the policy for long duration. The FAB is generally not paid for policies which have “Guaranteed Additions” (explained below). Here is an indicative list of FAB. 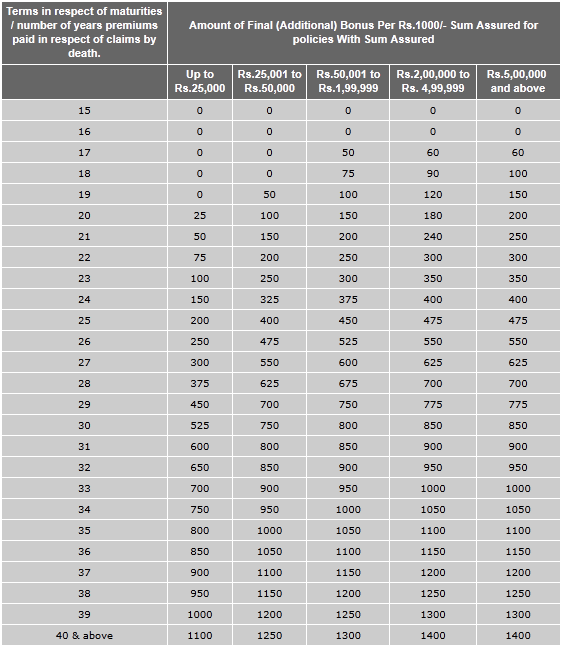 This is again a bonus which is declared for being loyal to the LIC and completing a longer tenure. Generally it’s declared at the end of the policy, but for some policies it might be applicable after completion of 5 or 10 yrs. For example – In Jeevan Saral , the policy holders will earn such additions after a minimum of ten policy years have been completed.  This is usually an amount declared per thousand of sum assured depending on the corporation’s performance. Loyalty additions are totally non-guaranteed.

Most of the people who buy any Traditional Policies from LIC or any pvt companies’ don’t think a bit about terms and conditions on exiting the policy much before maturity. A general assumption is that they will at least get their paid premiums back with sum interest. I have seen so many cases like that where people are literally shocked to hear that they will get peanuts or nothing from their policy if they choose not to continue the policy. Surrendering of the policy works this way –

You will not get anything back if you stop your policy without paying for 3 years. Almost every traditional policy attains minimum surrender value after the policy has run for 3 yrs.

After 3 yrs, if you surrender your LIC policy, still you will only get a small fraction of your total paid premiums that too excluding first year premiums. So suppose you have a policy which has Sum assured of 10,00,000 for 20 yrs term with Rs 50,000 premium per year. If you have decided to surrender your policy after paying 5 premiums (you paid 2,50,000 in 5 yrs i.e. Rs 50,000 each year), then you will get around 30%-40% of 4 premiums paid (first year premiums are excluded), hence the total would work out to be only Rs 60,000 – Rs 80,000 only + proportionately reduced amount of accrued bonus if any (only because you completed 5 yrs, else you will not get this also).

A very important point to Note : A lot of people do not like to close their LIC policies after paying for 1-2 premiums because they will not get anything back for the 1-2 premiums already paid. They think that they will surrender the policy after completing 3 yrs, so that they will get at least something back. This is total emotional decision and not mathematical, because if you do maths you will see that surrendering the policy after 3 yrs is the worst decision if you have already realised that you should not continue with the policy. For example, if you are paying Rs 10,000 premium per year and completed 2 yrs, you paid Rs 20,000, If you close this policy now, you will lose all money (Rs 20,000), but you can save Rs 10,000 as third premium. If you choose to complete 3 yrs and then surrender, then you have paid Rs 30,000 and you will get back 30% of 2 premiums (first year premium not included), so you get back Rs 7,000 (loss of 23,000 as you paid 30,000 and got back 7,000). Do the math if you completed 1 yr only yourself, its more worst!

Note that surrender value is nothing but your future maturity value reduced to today’s value, so if the maturity value is Rs 10,000 after 20 yrs and if you want it before LIC will pay you the Net present value as per today’s term.

A lot of times when you have completed 3 yrs of policy, you might not want to get your money back immediately, in which case you can made your policy paid up (just stop paying premium and it becomes Paid up). When you do this, you can stop paying further premiums but you will get your total premiums paid + accrued bonus any at the end of the maturity period. This might work out better sometimes compared to surrendering if you were going to invest the proceeds in some debt instrument.

What are mortality charges

A lot of agents advertise these policies under the head “ Free Insurance Cover “, But all the policies charge premium or charges for providing Insurance cover and it’s called “Mortality Charges”, these are the same charges which are there in Term plans and ULIP’s, but may be in a different way, so nothing is free, some part of premium goes in covering you and rest of it is invested in Debt instruments which can give you assured returns at the end of the maturity.

You can also get loans at the time of crisis on your LIC policies, but the maximum loan amount available under the policy is 90% of the Surrender Value of the policy (85% in case of paid up policies) including cash value of bonus. The rate of interest charged on loans is at 9% to be paid half-yearly. Is there any other terms and conditions which you dont understand in your LIC policies ? We can all help you understand it in comments section .

Are you looking for surrendering your LIC Policies ?

By now you must have got a good understanding of your LIC policies and how they work. You can find out the return of your policies using the IRR method taught in this article. If you feel that you want to continue your Policies then well and good. But if you feel that you want to close your policies, do it soon because delaying the decision will cost you a lot in long run. I hope its clear to you how your LIC policy works for you .