LIC Bima Account is the latest product launched by LIC of India on this festive tax season (generally known as JFM, JAN-FEB-MARCH, Tax saving season). There are mainly two varieties of this insurance plan called LIC Bima Account 1 and LIC Bima account 2, which differ a bit in terms of premiums, tenure, etc. No wonder that it’s the best time to launch the insurance plan as everyone is looking forward to investing in tax-saving , and when something has a tag of “Guaranteed returns” + “LIC” , its an instant favorite :).

LIC Bima account comes under sec 80C, you can save income tax on the amount invested.  A lot of risk-averse investors will be investing in these plans. However, It’s important to know what these plans have to offer in terms of returns and see if it’s as transparent as it looks like. The company claims to pay a 6% return, but will it be 6% by the time it reaches your hand? Let’s look at it. 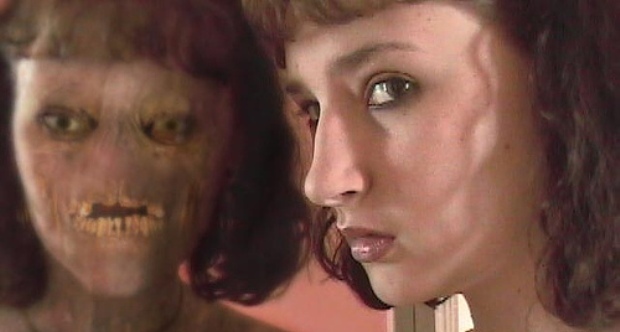 Did you notice the above picture? It’s very much related to our financial services industry. Every other financial product has a face, which is shown to public, but if you analyze it further and look at  it from the mirror of IRR, you can see its real face which is too horrifying sometimes .. Be it ULIP’s, Endowment plans and even PMS schemes, every other product has some real face which we need to find out . I have tried it find the real face of LIC Bima Account policy here. It’s up to you to decide is it beautiful or not! 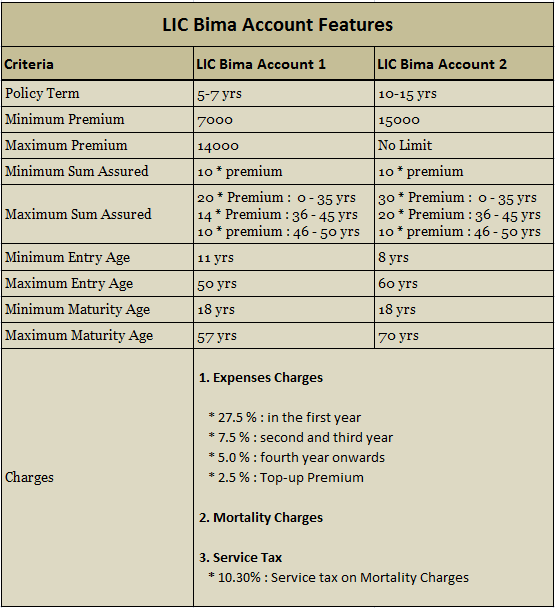 The lock-in period for these policies is 3 yrs, You can surrender the policy after paying the premium for 1 yr, but you will be paid back only after completion of 3 yrs lock-in period. The common part of both the plans is that you will get 6% returns from these plans if you continue paying the premiums till maturity, but only 5% return if you make it as paid-up policy. There will be a bonus also paid by LIC in these plans, but it would depend on the company experience with the plan and bonus is not guaranteed. Also the bonus will only be applicable for investors who have completed the whole tenure.

Important: Taxation of LIC Bima once DTC is in Force

In that case, they will be able to claim the tax deductions in this current year and next year also, however there after they won’t be able to claim any deductions on this policy. I am not sure how many investors are looking at this point. The majority of investors in LIC Bima are going to be from small cities, who will definitely have no idea about this taxation point.

So what is the commission LIC agents will make from selling these policies? Here are the numbers shared by an LIC agent with me over the phone.

What are the returns from LIC Bima plans?

This is where one has to pay attention to. Note that the returns of 6% are offered only in the Net amount invested (Final Amount in the charts below). We will take an example of LIC Bima account 2 Plan 806 below which I got from. Suppose you invest 1,00,000 per year in this plan for tenure of 10 yrs,  then at the end of the tenure you will receive 12,36,911, guess how much actual return does it translate to? So we have to do an IRR analysis for this to find out the actually CAGR return an investor will get. As per IRR analysis, the returns turn out to be 4.217 %. So this is the return an investor would earn in 10 yrs, note that is the return without considering any bonus.  For investors who will make the policy paid up or surrender it, for them the IRR would be drastically low and might be as low as 0% or negative also depending on how early investor makes it paid up.

Look at the chart below which shows you the IRR analysis for LIC Bima Account 2 policy, The numbers below are provided by an LIC agent over email to me. 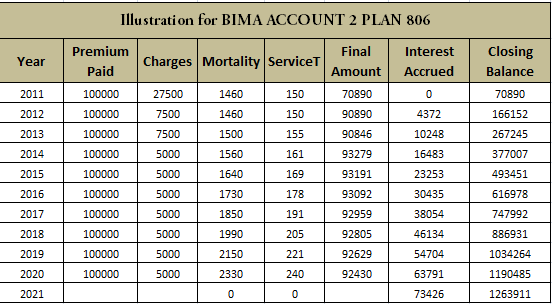 So the main point here is that why is an investor not informed about the actual return which he gets in his hand? Why the returns of 6% are shown in a way that common public will not be able to find it out. One can also show the returns like 9% or 10% and then increase the charges to such a level so that the investors in hand returns are just 4-5 %. These plans are going to generate a lot of attention and crores and crores will be generated. Do you feel it can be called misselling or Mis-use of Public trust, as the returns are in a way misleading? This is a question from you as an investor !.

I met with an LIC DO yesterday and he explained to me that BIMA ACCOUNT is for someone looking for other option than Saving Bank Account and thus the name.. Bank Account gives 3.5% and here it is with Minimum Guarantee of 6%, that too with Insurance Cover and tax benefit.

It’s another LIC stunt of JFM (JAN-FEB-MARCH) Tax saving season..Remember, LIC launched WEALTH PLUS last year on 8th FEB…Crores of policies were sold and crores of premium was raised by LIC in 2 months flat..I am eye-witness to last year’s madness when LIC agents were asking people to come along with FILLED FORMs for WEALTH PLUS and public obliging..and there we were, the KOTAK (or PVT PLAYERs) doing everything for the client but still being made to look second-grade in comparison to LIC..That the NAV of WEALTH PLUS now is Rs 9.63 is a different matter altogether 😉 Just wait and look for a new product from LIC every year in FEB..

Actually its not misselling, its MISSUSE of the TRUST that people have in LIC..”Whatever LIC come up with must be good” according to Indian public and thus the result..

Note that the actual returns from LIC Bima after considering the non-guaranteed bonus will be higher, but still it would hardly be attractive enough.

Comments? Are you buying it? What kind of investors should buy LIC Bima Plan?