Is Gold worth Buying ? A shocking Study

To understand this Study, we have to go back to years when human civilization started. Surprised! But yes, lets go back to those times where human civilization just started. Those days, economic activity was bare minimum and there were few trades between humans. For example, if a farmer wanted to build a home, he used to give some quantity of grain to carpenter, plumber etc and that system was called BARTER SYSTEM. So goods itself were basically used as currency.

Economic activity grew and then emerged an alternative currency which was in the forms of coins and we had what is called ASHRAFIYA. We had gold, silver and copper coins which were used as currency and it was Emperor who used to control the currency system. Then economic activity picked up further and since there was a limitation to the amount of gold, silver and copper we had, Paper currency emerged and till date such currency is the main form by which we all trade. Though now-a-days, we are witnessing another form of currency which is called Plastic Card Currency/ Credit Currency which if not used judiciously, can be a disaster. In fact,the entire US came to a halt in 2008 as credit currency was mis-used to unimaginable extent.

Today also, each emperor (so called Government) produces and controls their own currency as DOLLOR, Rupee, Dinar etc. But internationally, gold still remains the purest form of currency as it cannot be manipulated. Now in paper currency world over, Dollar became the most acceptable currency as US economy is still the biggest and almost all countries trade with US. After US dollar, the most acceptable form of currency is GOLD. If you have gold and you are not carrying dollar, you can still buy items in any country of the world but you cannot do so with Indian Rupee. Hence, in economic terms, gold is a currency.

Gold in relation to Dollar

Gold is a recognized international currency and currently Dollar is the most recognized Paper Currency. Hence gold is valued in terms of Dollar and not in Rupee. Now if we go back in the history, in the year 1976-81, gold had a dream bull run. From $100 per ounce in 1976, it had gone as high as $850 per ounce. That rise took place as people feared that US economy would collapse and $ would have no value. That time, US was in war with Vietnam & then came Iranian Revolution – inflation in US was at very high levels and in a way, there was hyper-inflation.

Once the war was over and inflation eased out, Gold came crashing down. In the year 1990, it was $400 per ounce and in the year 2000, it was close to $250 per ounce. That means the effect of bubble was so big that even in 20 years, the gold could not recover its original price and was languishing at less than 1/3 of its peak price. So please don’t be surprised if you will be able to buy gold again at levels of Rs 10000-12000. 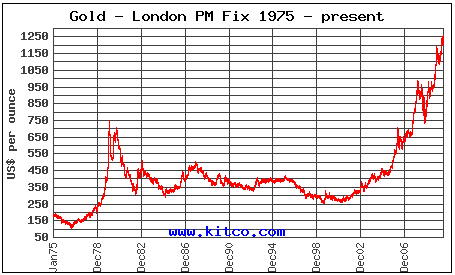 Now, Dow Jones was at 10000 in the year 2000 and today also it is at same levels. The US economy is in bad shape and in last 10-12 years, it has not really made any significant progress, rather its debt is so much so high, that there is a fear that US would only have to print further paper currency i.e., dollar either to repay the loan or to keep in the economy going. The moment any government print notes without significant growth in the economic activity, the currency loses its value because of high inflation as same quantity of goods and services are being chased by more money. Anyway, US government is printing billions of dollar just to keep the economy afloat.

So, the rise in Gold is happening on the background that the most recognizable international currency is loosing its value. If US economy further goes down and government there keeps printing notes, again gold may rise in dollar terms. Such fear exist, even in 1979-80. We don’t know what lies ahead as we are not astrologers.

Dollar in relation to Rupee

In the year 1980, $1 was equal to Rs.8 and today as we are writing this article, $1 = Rs.46. Dollar has appreciated more than 5½ times in last 30 years. In the year 1991, there was a time, when Indian government was literally bankrupt and they had to devalue INR more than 25% in just a single day, just to repay the debt we had. That was the time, India was liberalized and government opened their economy and allowed foreign companies to do businesses. Since then, India has grown dramatically. The fact of the matter is that in the year 1991, sensex was close to 1000 and today it is at 18000.

As Indian economy keeps rising and US economy keeps doing down or at the max stands where it is, the likelihood is that dollar should depreciate. In the year 2007, dollar had depreciated to as low as Rs.37.

Gold with relation to Rupee

What can happen in future?

As we have said, we are not astrologers, so we can’t predict future. Though we can give some options that may happen:

Basically, the price of gold depends on currency movements; for example,  in Yen terms (Japan) gold have moved 240% & in Pound terms (Britain) 390% in the same period (Check below Chart). 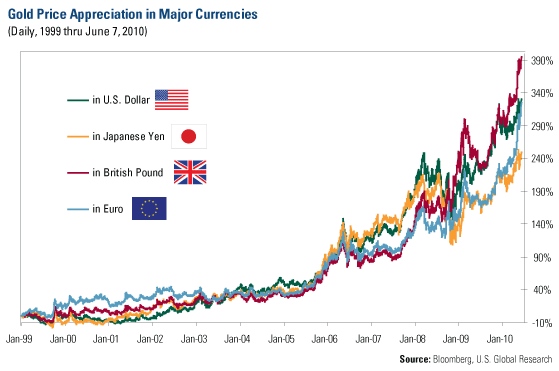 And you already know about Gold price in Rupee term. So what do you feel – whether India will grow & its currency will appreciate or economy will slow down & our currency will depreciate further? We don’t know what lies ahead, but looking at the history, we are not bullish on gold as much as we are bullish on Indian Equities. As long as world keep rising, gold will not give much return. Here we would like to add a recent quote of  legendary investor Warren Buffet – “We live in a world where 80 years out of 100 will be good. But we don’t know which 20 will be bad.”

We always used to suggest investors that gold is not an investment, it is an insurance which would save you in case the entire financial markets were to tumble down. The live example is that of Zimbabwe where, paper currency has lost its value and if you are holding paper currency, it is depreciating at a rate which is unimaginable. You have to carry crores of Zimbabwe currency just to buy a loaf of bread. Now if you are holding gold, you can actually buy or barter goods there. At least, you can go to neighboring country South Africa and buy what you want as gold is recognized everywhere.

Now, if an average Indian household were to look at their asset allocation, they already hold more gold in the form of jewelry or otherwise than they hold Indian equities. In fact, Indians are the biggest consumer of gold. One must consider gold as part of asset allocation tool and over-boarding on it may not be that a great idea. It may happen that in short run, gold may give better returns but mind you, it is Indian equities that will create a long lasting wealth for investors.

One more important point to note

It is often said that Gold is a Hedge against Inflation. But if you were to look at the graph below, you would find that gold has not kept pace with rising inflation. The blue line shows the actual price of gold and the red line shows the price which gold should have carried in order to match with inflation

In October 2009 when Gold was $ 1072, Bloomberg made this statement “While bulls say gold is cheap, the inflation-adjusted price is 15 percent above its 30-year average, Bloomberg data show.” First time in 100 years gold has touched it’s inflation price – what will happen next?

What they meant is that it is for the first time that gold price is above its inflation-adjusted price which clearly states that gold is over-priced as it is a sheer currency and nothing else.

The following are Google trend charts. It analyzes a portion of Google web searches to compute how many searches have been done for the terms you enter, relative to the total number of searches done on Google over time. This clearly shows that people start searching for investment which have gone higher in recent past. Check 2nd Graph of Mutual funds which peaked in December 2007 when equity markets were also at their peak. No one was searching for Mutual funds in the end of 2008 or start of 2009 when actually it was the best time to invest. Upto 2007 end when it was best time to invest in gold but no one was searching for it but when price went up, the number of searched went up. 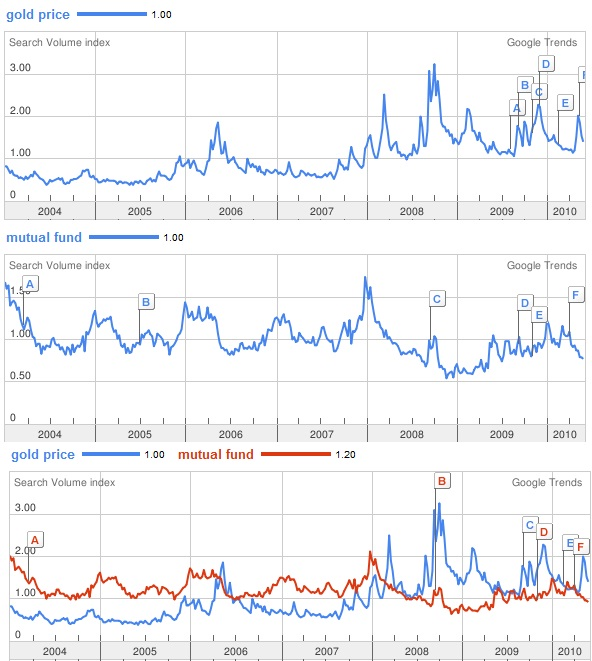 Few points that we would like to leave open for discussion:

But the problem is “The markets can stay irrational longer than you can stay solvent…“. So never try to time the markets/assets & keep a proper asset allocation.

This is a guest article by Hemant Beniwal & Ashish Modani. They both are CERTIFIED FINANCIAL PLANNERCM & writes at The Financial Literates.

80 replies on this article “Is Gold worth Buying ? A shocking Study”