Bond prices go up when interest rates go down! . Have you ever heard that and wondered how is it possible ? What goes behind the scene which makes it happen? It’s important for you to know this, because now a days there are enough financial products which depend on interest rates, for example Debt funds, Fixed Maturity Plans, Infrastructure Bonds and many products. In this article I will show you in simple language how bonds prices and interest rates are related. 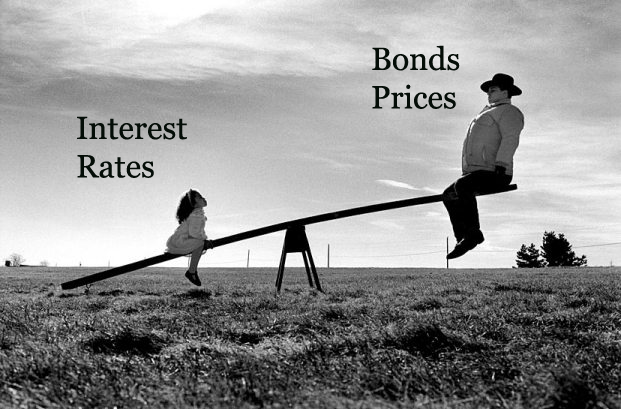 How interest rate and bonds prices are related ?

Let me give you a simple example . Suppose in the market the interest rates are around 10% , Now Ajay lends Rs 1,000 to Robert for 1 yr at the interest rate of 10% , which means Ajay will get Rs 100 as interest next year plus his initial 1,000 of principle , so Ajay will get back total Rs 1,100 at the end of 1 yr. Now suppose they sign a paper where all these terms and conditions are written and we call this paper as “BOND” . Who ever has this bond at the end can go to Robert and get Rs 1,100 by giving them that BOND paper. Now imagine two situations where interest rates move up and down and a third person called Chetan wants to buy the bonds after interest rates has moved. Lets see how bond prices move in both the cases here.

Which means now if a person lends Rs 1,000 to some one, he can get only 9% as interest. But Ajay has a special bond! , which actually gives 10% return (also called as coupon rate) and not 9%.  He is getting 1% more than what a new bond in market will give. Now if Chetan comes to Ajay and wants to buy this Bond from Ajay, Will Ajay give this bond at 1,000 ? No , This bond is worth more now, because this bond is giving more than what a normal bond in market can provide. What will be price Ajay can charge from Chetan ? It’s very simple maths.

If Chetan goes to market and invests 1,000 , He will get 1,090 at the end of the year because interest rates are at 9% only. So how much should Chetan pay for the bond Ajay is holding as he will get Rs 1,100 with that bond. It’s a simple calculation

So now if a person has to buy Ajay’s bond they will pay a less price (discount) . Using the same process you saw above you can find out that the new value of bond will be 982.2

Now both the examples I showed you was a very simple example, considering maturity after 1 yr. It was just to give you a brief idea about how interest rates and bond prices are interconnected. However in reality bond pricing is much more complex as maturity can be much more than 1 yr. It can be 5 yrs or 10-15 yrs (SBI bonds). In that case finding a new bond price become a little complex . However the overall funda remains the same . You see what are the future cash payments you can expect from the bond and relate it to the current interest rates and find out the Net present value of the bond in today’s term. We will not go into how the complex formula is arrived at , but I am giving you the formula below which you can use incase you want some time.

Here is the formula which you can use directly for Bonds New price after change in interest rate .

N = Number of years for bond to mature

Recently SBI came up with their Bonds issue . Lets say you invested Rs 1,00,000 in those bonds with maturity of 15 yrs and you are getting 9.95% interest on it and lets say that after 3 months SBI again comes up with another bond issue but this time they are giving interest of only 9% on those bonds. In this case your bonds will become more valuable now as your bonds give more interest that whats going on currently in the market . So now if you want to see your bonds on stock exchange it will quote a higher price which is P in the formula above and lets calculate it. Also lets see what are different variables in this case as per the formula above .

Now if we use the formula above we will get

Which means you will fetch 7.6% premium in market because of decrease in interest rates . Now you find what will be bond price if the next SBI issue comes with 11% interest ? Tell me in comment section . The example I gave you is based on the formula only and small details are not taken care of which can further affect bond prices in market.

Note that in your life, you make many investments where interest rates come into picture but it’s behind the scenes . I will talk about some of those here .

Infrastructure bonds and other Bonds

When you invest in Debt funds or Fixed Maturity plans , you give money to mutual funds and the fund manager uses this money to invest in bonds issued by Companies, government and other bodies . Based on the interest rates fluctuations in market they fetch good or poor returns based on their judgement . You as an investor would have more clarity about whats going on behind the scene . Just don’t be an ignorant investor who does not know how things work .

What you should learn from this ?

This simple information is used by companies and govt to issue bonds , in the recent issue of SBI bonds even though SBI is giving 9.95% interest , if after 5th year they feel that interest rates can move down , they have kept their options open to kick you out of bonds and close the contract. Where as if the interest rates move higher , you can’t do nothing but you are stuck in those bonds for all 10 yrs , unless you choose you get rid of it by selling it on stock markets .

Share your comments about this and don’t forget to forward this article to any of your friends who were always confused about interest rates and bond price relation 🙂 .

45 replies on this article “How Interest rate and Bond prices are related ?”