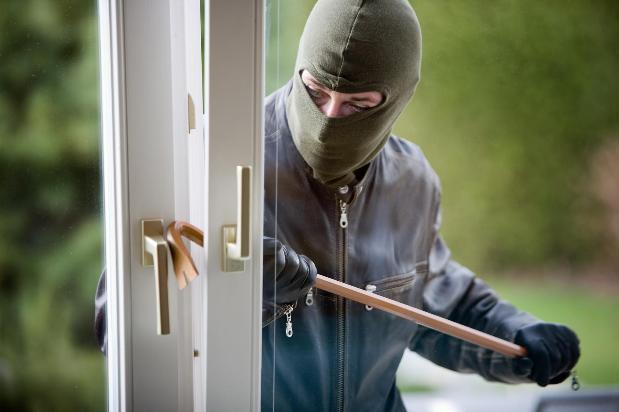 What is expense ratio in Mutual Funds?

Let me first clear out what is expense ratio? As an investor we just buy and sell mutual funds, but in the background there are many expenses which a mutual fund (and even ULIP’s) has to incur. Some of which are; fund management fees, agent commissions, registrar fees, and selling and promoting expenses. As per SEBI regulations, the maximum expense ratio of an equity fund can be 2.5% and for a debt fund, it should not cross 2.25%.

So, the next question which will come in your mind is “So, does this small deduction really make a lot of difference?” The answer is Yes & No. If you are looking at 6 months or 1-2 yrs, it’s not much of a concern, you can probably just avoid it and answer is Yes, if you are looking from long-term point of view like 5-10-20 yrs. In that case it’s mostly something which you can put your eye on once.

Expense Ratio – With & Without

Let me first give you a very clear idea about the distinction between two scenarios where there was expense ratio and there was no expense ratio in a mutual fund. Let’s take this example at least to understand the concept.

Suppose there was a mutual fund called “ Jagoinvestor-Ninja Fund ” (attractive name haan!) which generates a 12% return before expense ratio. Now let’s see how this fund final returns will turn out to be in different expense ratio scenarios like 2% , 1.5% , 1% ,0.5% and 0% (imaginary) . 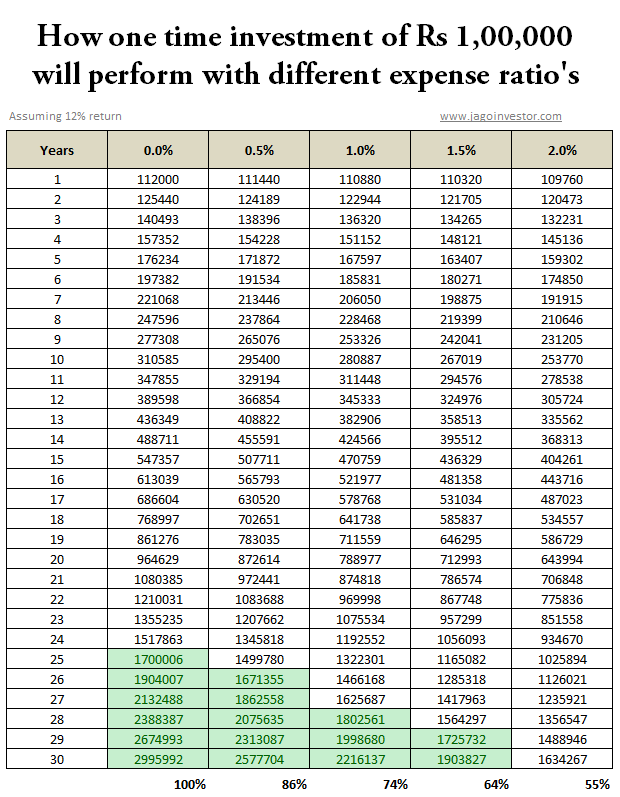 Also if you see the chart above, you can see a greed part showcasing how low expense ratio cases achieved the same corpus few years early than the high expense ratio scenario. You can see that with 0.5% expense ratio, 16 lacs was the corpus in 26th year itself which took 30 yrs in case of 2% expense ratio. In the chart below you can see how much the difference in different scenario’s final corpus percentage wise was. 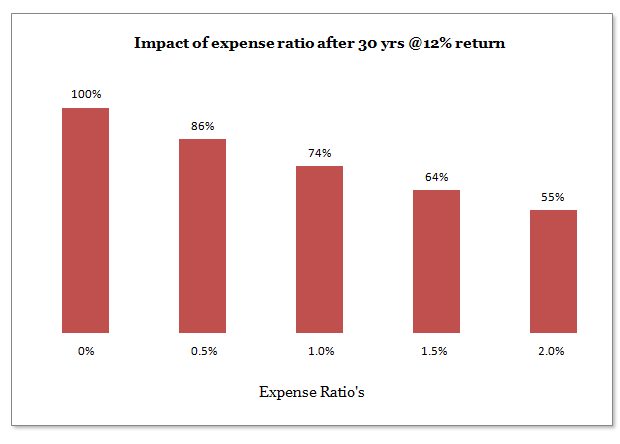 Remember that when you compare returns of mutual funds in long run ( video ), the calculations are shown after-expenses; hence it might happen that a better fund today is better in returns because its expense ratio was lower than the other one. It might happen that two funds differ in returns to some extent, but don’t vary too much when it comes to their ability to generate returns before the expenses. Naturally the mutual funds which have lower expenses would have better return at the end.

As per a small study by moneylife , this phenomenon is true across the category , here are the excerpts : –

Consider the performance of 43 equity diversified funds which have been in existence before 2000. We chose 2000 because we wanted to gauge decadal performance of the funds. Of these 43, we selected the 15 most expensive funds and 15 cheapest. Among the expensive lot, we have only seven outperformers and eight underperformers. Whilst among the cheap funds, we have 12 outperformers and only three underperformers. It is not that the expensive funds have not earned good returns, but a part of their returns has been washed away by their high expense ratio.

High expense ratio will hurt you in long run, so incase you are choosing two similar looking and similar performing financial products, you should look at their cost structure.

Can you share what you took from this article and how you will apply in your financial life?