What are Chit funds and how do Chit funds work ? There are lots of chit funds in india like shriram chit funds , margadarsi chit funds and I would like to show you how chit funds exactly work and what are pros and cons in Chit funds. Over the past many years there has been large scale frauds and scams done by large chit fund companies. However, a lot of people do not understand the working and wonder how chit fund works. 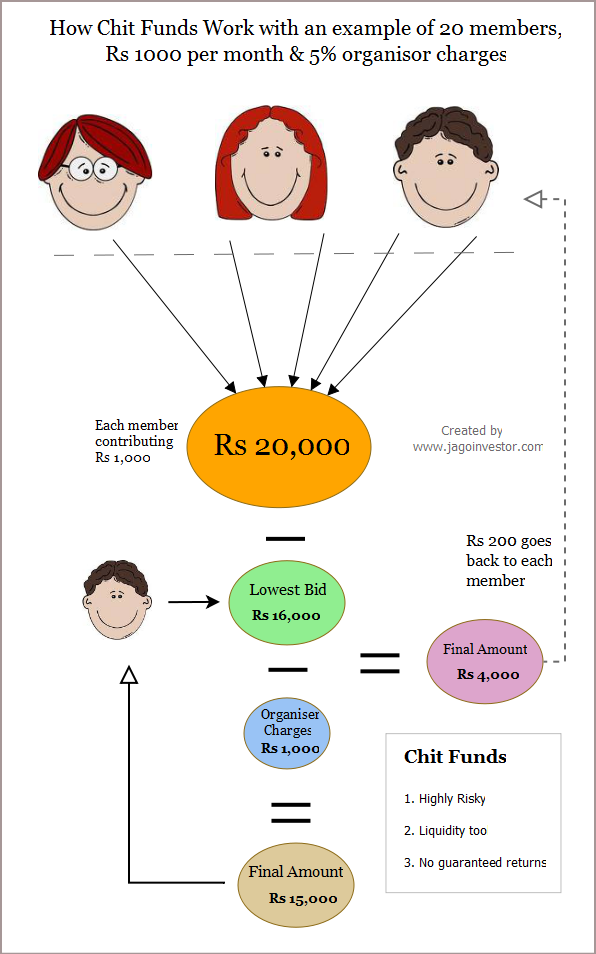 What are Chit Funds & How they work !

Let’s say there are 20 people who come together and form a group. Each one will contribute Rs 1,000 per month and this will continue for next 20 months (equal to number of people in the group). In this group there will be one organiser, who will take the pain of fixing the meetings, collecting money from each other and then doing other procedures.

So each month all these 20 people will meet on a particular day and deposit Rs 1,000 each. That will make a total of Rs 20,000 every month. Now there will be a bid on who will take this money. Naturally there will be few people who are in need of big amount because of some reason like some big expenses, liquidity crunch , business problem, Beti ki Shaadi etc etc … Out of all the people who are in need of money, someone will bid the lowest amount, depending on how desperate he is for this money. The person who bids for lowest amount wins. Suppose out of total 3 people who bid for 18,000, 17,000 and Rs 16,000, the one who bids the lowest will win. In this case it’s the person who has bid Rs 16,000.

There will also be “organiser charges” which are around 5% (standard) of the total amount, so in this case its 5% of Rs 20,000 , which is Rs 1,000. So out of the total 16,000 which this winner was going to get, Rs 1,000 will be deducted and the winner will get only Rs 15,000, Rs 1,000 will be organiser charges and Rs 4,000 is the profit, which will be shared by each and every member (all 20 people), it comes out to be Rs 200 per person, and it will be given back to all 20 members. So here you can see that the main winner took a big loss because of his desperate need of getting the money and others benefitted by it. So each person actually paid just 800, not 1,000 in this case (they got 200 back). Note that when a person takes the money after bidding, he can’t bid from next time, only 19 people will be eligible for bidding.

Now next month the same thing happens and suppose the best bid was Rs 18,000 , then winner will get 17,000 (after deducting the organiser fees) and the rest 2,000 will be divided back to people (Rs 100 each) . So each person is paying effectively Rs 900. This way each month all the people contribute the money, someone takes the money by bidding lowest, organiser gets his charges and the rest money is divided back to members. You will realise that the person who takes the money at the end will get all the money except organiser fee, as there is no one else to bid now. So the person will get around Rs 19,000 in the end, if you try to find out the returns which he got out of the whole deal, it will depend on two things, how much lower bids were each month and the fees paid to organiser, if bids and charges are very low, then a person will make more money at the cost of other situations.

So this is pretty much how a chit fund works, there are various versions of chit funds and how they work , but the idea was to communicate the basic model and how it works.

A big question which is in every one mind is “ Should I invest in Chit funds? “. Chit funds are not some investment products in which someone invests! By design you can see that it’s only a support structure for needy people who are unsure of their cash flows or some big expenses coming on the way. It’s only for those who can’t get loans from banks or some lender. In which case chit funds provide that structure where one can take the benefit of it. But beware!  Whenever someone says “Chit funds”, the only thing which comes to the remind is “Fraud”, “Scam” and “Something Fishy” and its true to great extent as there many chit fund companies which come in market and run with the money . The only condition where I feel one can go for it is if all the participants of the chit fund are known to each other properly and there is high level of trust between them. For example, you can do it with your colleagues at office whom you trust and are friends with for long. But if you dont have liquidity issue and can get loan from a bank, then I dont see any need of doing this.

In smaller cities, you can see your father, grandfather and even many housewives form these groups with friends with whom they are from last many years. A lot of people on this blog might have experienced how their father used these networks to get huge cash at the time of need. One of the readers Jagadees shared his experience with me on mail

The great advantage for the village people would be availability of immediate funds in the times urgent need. My father would say that he met all his life obligations like his sister’s marriage, his marriage expenses, my grandpa’s medical emergencies, our education expenses were met solely through this type of monthly chit fund investment.

Greed has no limit. What was created for help to each other under a trusted network is now converted as a business and many people have started opening Chit fund shops where they become the main organiser and pocket the organiser fee. Investors have started looking at these chit fund companies from investments point of view and in greed of high returns, they invest their hard earned money with these chit fund companies and at times there are frauds and scams. Chit fund companies are regulated in most of the states by Central Chit Funds act,1982 and they come under the purview of state governements. RBI has no role in regulating them. But still you know how easy it is to do frauds and scams in India (don’t forget commonwealth & 2G and 3G and 4G scams, wah !  I am futuristic). Let me share with you a horrible experience how an old man lost his 40 yrs of earning in chit fund

My father-in-law when he retired, without telling any of us he put all his money in a chit fund. nobody knows how much & in which chit fund he deposited. That was the time when a series of chit funds went bust in chennai. Pity the chit fund in which he deposited also went bust. he had a mild heart attack. The pain he underwent other than the heart attack was terrible. He was in an ordinary job & after 40 years of hard work he had earned that money.

More than the loss of the money, it’s the shame, foolishness and the iyalaamai to take any action by us, the government kills.we supported him, but he wanted to be independent even after retirement. that objective was defeated by his shear foolishness. none of us ever asked him anything about it. but every day he must have been repenting for that . ( via )

Can you believe that as high as 5-10% families are associated with chit funds in South India ? For example – The share of households participating in Chit Funds increased by 9% in Andhra Pradesh, 89% in Delhi, 15% in Tamil Nadu and 4% in Kerala between 2003 and 2006. You can see below graph that shows Kerala having 9%+ penetration in Chit funds which means 1 out of every 10 family is in some chit fund.

As per a report from IFMR on Chit Funds , most of the people in smaller places are attracted to chit funds, because of easy availability of easy credit and simplicity of chit funds. In small places banks are not much interested in lending to poor people and poor people see chit funds as perfect way of getting a loan, though at a high cost. So you can also look at them as microfinance tools. All of south India and Delhi is deeply flooded with chit fund companies (thousands of them) and its reach is much above what you are thinking right now.

Overall, chit funds are not recommended unless it’s a person group formed by friends and relatives whom you trust a lot. I don’t think one should put money with chit funds which are not among their social circle. It might make sense for people in smaller cities to look up to them. As the last note, these chit funds are not investment vehicles where you park your hard earned money, So please avoid them unless you want to exactly take that kind of risk.

Please share your personal experiences about chit funds , I am sure all the readers who are from smaller places , they have seen it and for sure there father or grandfather had used chit funds at some point of time to fund a financial goal 🙂 .

279 replies on this article “How Chit Funds Works”